According to RenewableEnergyWorld news, EnergySage and NABCEP released the results of the fourth annual Solar Installer Survey, which gathered responses from more than 870 local, regional and national residential and commercial solar installers from across the United States.

In addition to the obvious finding that installers overwhelmingly support Chuck Schumer’s proposal to include permanent tax incentives for clean electricity and storage, is the finding that homeowners are asking for batteries in addition to their solar panels. Interestingly they are asking for Tesla batteries, which installers frequently do not have.
According to installers, more than one in three solar shoppers are also interested in a home battery, resulting in more solar-plus-storage installations in 2018. However, responses also illustrate a gap between consumer brand preference and what installers stock. While over 55 percent of installers reported that their customers specifically request Tesla battery solutions, only 12 percent of solar installers surveyed actually carry and quote the Tesla Powerwall.

The survey also shows that more than half of the installers surveyed are more confident in the solar industry in the last twelve months than they were in the past. At the state level, installer confidence rebounded in New York and California as governors in those states pushed for 100 percent renewable futures. ——————–***——————–
Source:https://tinyurl.com/y45mqqjb
Photo:www.renewableenergyworld.com
…………………………………….
‘All rights to go to the author of the news & image as mentioned above’
——————————————- 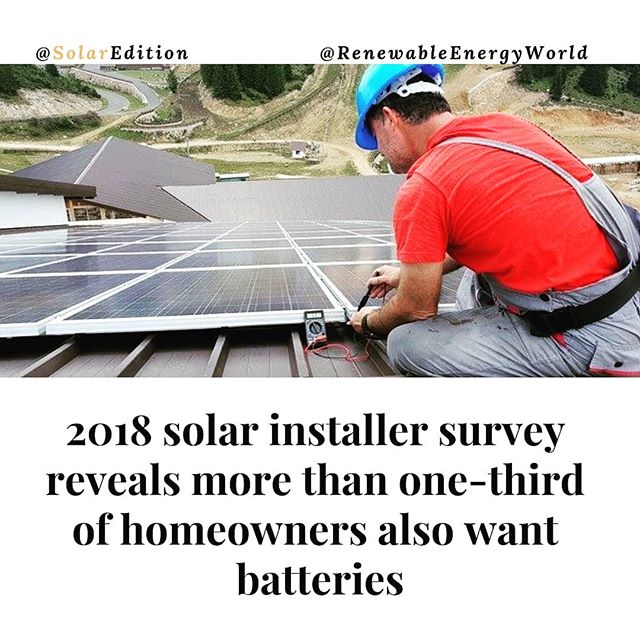 It is the second part of a bipartite article. In this article, we want to compare two types of Tandem solar cells. Perovskite-Perovskite tandem solar cells (PPTSC) have three advantages compared to conventional photovoltaic cells, […]

Elon Musk, the CEO of Tesla, has announced at a European Battery Conference has revealed plans to build the world’s largest battery-cell factory at the group’s electric car plant near Berlin. According to SolarDaily, this […]

Researchers have created tiny functional, remote-powered, walking robots, developing a multistep nanofabrication technique that turns a 4-inch specialized silicon wafer into a million microscopic robots in just weeks. Each one of a robot’s four legs […]