Solar Edition Instagram:
According to PV-Tech, According to provisional data from BloombergNEF (BNEF), global solar PV installations reached 109GW in 2018 cost of installing a megawatt of photovoltaic capacity fell 12%, which spurred markets outside China to increase installations.
BNEF noted that global investments in the solar sector had declined by 24% to US$130.8 billion in 2018, primarily due to a sharp decline in capital costs, which were driven by solar policy changes in China, under the 531 New Deal, creating surplus product supply.
Jenny Chase, head of solar analysis at BNEF, commented: “2018 was certainly a difficult year for many solar manufacturers, and for developers in China. However, we estimate that global PV installations increased from 99GW in 2017 to approximately 109GW in 2018, as other countries took advantage of the technology’s fiercely improved competitiveness.
Despite the 531 New Deal for solar in China, BNEF noted that China was again the leader in overall clean energy investments in 2018. However, at US$100.1 billion, this was was down 32% on 2017’s record figure because of the plunge in the value of solar commitments, according to BNEF.
BNEF reported that the US was the second-biggest investing country for clean energy in 2018, increasing 12% to US$64.2 billion. This was said to have been driven by wind and solar developers, increasing the pace of investments ahead of the decline in tax credit incentives in the next few years.
——————–***——————–
Source:https://tinyurl.com/y86xurm4
Photo:www.pv-tech.org & @bloombergnef
…………………………………….
‘All rights to go to the author of the news & image as mentioned above’
——————————————- 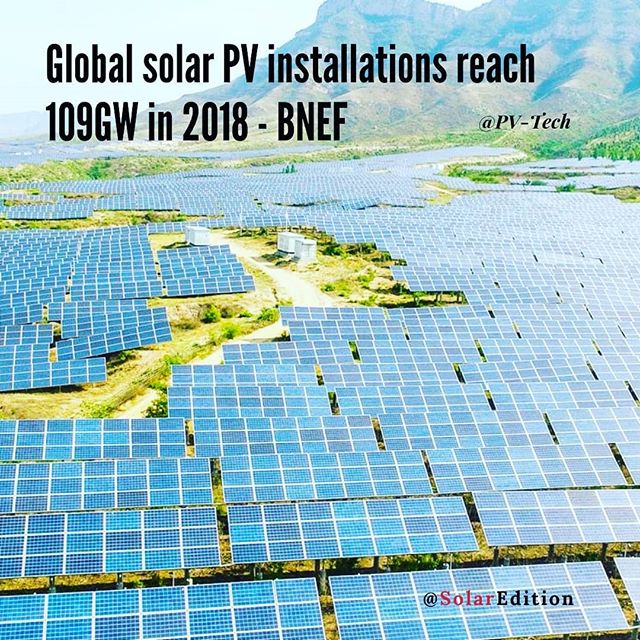 Chile Tests Floating Solar Panel To Power Mine and Save Water

A floating island of solar panels is being tested in Chile as a way to generate clean energy and reduce water loss at mine operations, a cornerstone of the Andean country’s economy that uses huge […]

Spain is on the Track of Becoming Coal-Free by the End of 2025, By Closing Coal Plants

Spain will become coal-free by the end of 2025. Seven Spanish coal-fired thermal plants out of the 15 plants were phased out on June 30th. These close-downs happened due to financial issues. The total capacity […]