FridaysForFuture is a movement that began in August 2018, after 15 years old Greta Thunberg sat in front of the Swedish parliament every school day for three weeks, to protest against the lack of action on the climate crisis. She posted what she was doing on Instagram and Twitter and it soon went viral. On the 8th of September, Greta decided to continue striking every Friday until the Swedish policies provided a safe pathway well under 2-degree C, i.e. in line with the Paris agreement.
The hashtags “FridaysForFuture” and “Climatestrike” spread and many students and adults began to protest outside of their parliaments and local city halls all over the world.
According to TheGuardian news, Greta Thunberg, the founder of the Youth Strike for Climate movement, has been nominated for the Nobel peace prize, just before the biggest day yet of global action.
Thunberg began a solo protest in Sweden in August but has since inspired students around the globe. Strikes are expected in 1,659 towns and cities in 105 countries on Friday, involving hundreds of thousands of young people. ——————–***——————–
Source:https://tinyurl.com/yyz6nclw
Photo:www.theguardian.com
…………………………………….
‘All rights to go to the author of the news & image as mentioned above’
——————————————- 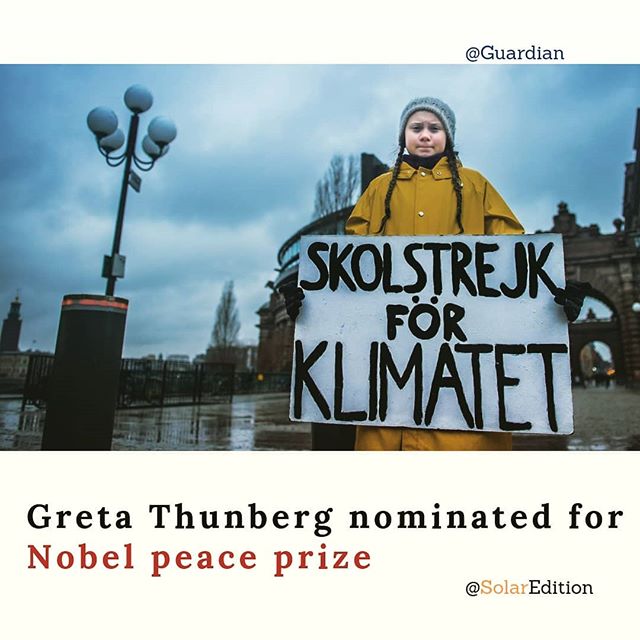 In the first part of this bipartite article, we mentioned that three encapsulation materials, EVA TPO and PVB, have grabbed the most share of the market. Although EVA has the bigger slice of it, it […]

Iberdrola has started construction of the largest PV project in Europe

Spanish utility company ​Iberdrola​ has started construction of a 500 MW solar farm in Spain. The company says​ it’s the largest PV project under construction in Europe. It will generate enough power for 250,000 people […]