The number of electric vehicles (EVs), buses, vans, and heavy trucks on roads is expected to hit 145 million by 2030, according to the recently released report by IEA [1]. Amid increasing the number of EVs in the global transportation fleet, there is a well-established history of competition for extending the driving range of EVs.

Thanks to this plausible and international championship, a newly emerging EV startup, Lucid Motors, grabbed the record of the longest driving range from its main and serious rival. Tesla model S sedan had the record with 659 km of estimated range. The Plaid version of Tesla model S has come out with a 1020 horsepower currently. It is worth mentioning that the price of this version is about $130,000.

The Air version of Lucid Motors, hereafter Lucid Air, has been presented in 4 variants by the company [2]. Lucid Air comprises Pure, Tour, Grand Tour, Dream Edition models. The prices are starting from $77,400 for the Pure model to $169,000 for Dream Edition. Moreover, its mileage in a single charge ranges from 650 km in the Pure model and 832 km in its most luxury model. They have reached the substantial driving range with 100 horsepower more and more than $39,000 as compared to the Plaid model of Tesla. However, the Pure model of Lucid Air has a close driving range to the Plaid model with near to half the price.

However, Lucid Air is accelerating less than three seconds from zero to 100 km, 2.5 seconds, the quickest title of EV is still in Tesla’s hands with 2.4 seconds.

One of the main challenges that has remained for the drastic increase in using EVs is the balancing between the driving range and price. One of the feasible solutions is to supply partly or completely the energy demand from the Sun. By embedding solar cells on the roof, hood, and body of EVs, Sono Motors and Lightyear have aimed to increase the range of their economical solar EV cars.

Hydrogen-powered Pickup Will be Commercialized by the Upstart Automaker, Nikola Motor

Nikola Motor company aims at producing hydrogen-powered pickup which will be presented in two models. “Nikola Badger” is the name of this pickup series. Nikola Badgers are 100% electric vehicles with hydrogen range extenders with […]

The December 2020 list for the Most-Efficient 72 cells commercialized solar panels bear no changes compared to the November list. Here’s the full list with links to the product data sheets Manufacturer Model Cell Number […]

South Korea’s re-elected president has vouched to eliminate carbon emissions by 2050. This has happened right at the heels of the statement given by Japan’s new prime minister to accelerate the nation’s emission targets. South […] 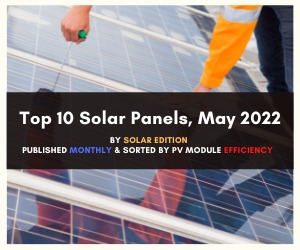