The promising solar cell materials called perovskites need a partner. Researchers marry a layer of perovskite, which absorbs high-energy blue photons in sunlight, with standard silicon, which gobbles up lower-energy light. In theory, such tandem cells should deliver a double dose of power, with electricity coming from both layers. But building two complete solar cells, one atop the other, adds cost and other challenges
According to Sciencemag, Gamelin reported that he and his colleagues have solved this problem. They used a common solar cell–growing technique is known as vacuum deposition to create thin, smooth layers of ytterbium-doped perovskite on roughly 14-centimeter silicon solar cells. The technique coats the miniature glass mountain range with an even perovskite film.
In the resulting tandem, nearly all the blue light absorbed by the perovskite is converted to near-IR photons, Gamelin reported. As a result, he predicts, topping a high-end silicon cell with the ytterbium perovskite should enable it to convert 32.2% of the energy it absorbs as sunlight into electricity, up from 27%—a 19.2% boost. Gamelin’s team is doing experiments now to confirm those predictions.
Gamelin and his colleagues launched a startup, BlueDot, to commercialize the technology. BlueDot hopes to leapfrog the other companies because its simpler tandem design should enable standard silicon solar cell manufacturers to integrate perovskites into their manufacturing lines more easily—and get perovskites onto the roofs of the world.
——-***——-
Source:http://tinyurl.com/y5bxsdl3
Photo:www.sciencemag.org
‘All rights to go to the author of the news & image as mentioned above’
—————— 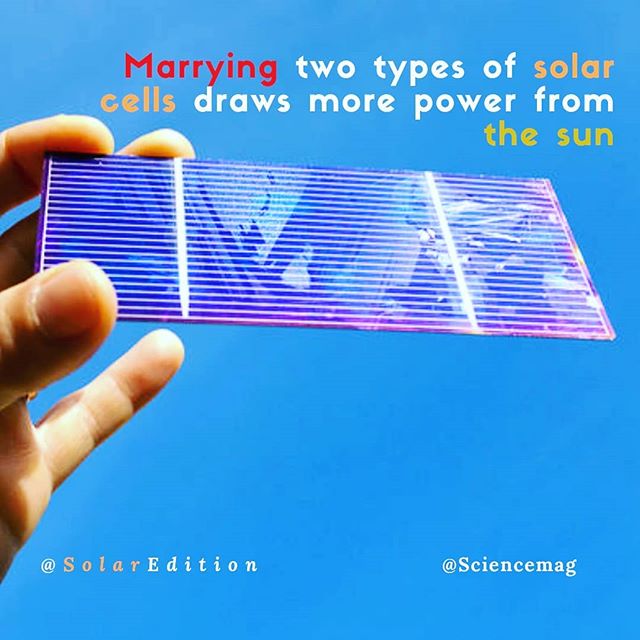 Ocean Sun, a Norwegian innovative FPV (Floating Photo-Voltaic) Tech organisation, and Fred Olsen Renewables have been awarded EC-funds, for a 0.25 MWp Floating PV project in “open seas”, off the coast of Gran Canaria. The […]

Spanish utility Iberdrola and Saudi petrochemical multinational Sabic has signed a 25-year power purchase agreement (PPA) with each other. This agreement is for Iberdrola to supply solar power for its industrial site in La Aljorra, […]