Recently we had an antique article about Selenium & Charles Fritts, but why these two are related? In 1883, New York inventor Charles Fritts created the first solar cell by coating Selenium with a thin layer of gold. Fritts reported that the Selenium module produced a current “that is continuous, constant, and of considerable force.” This cell achieved an energy conversion rate of 1-2%. No one ever thought that one-day Selenium could actually help solar cells to improve their efficiencies.
Now a collaboration of Colorado State University Next Generation Photovoltaics Center & Loughborough University, have discovered that adding Selenium to the mix can boost thin-film solar’s efficiency to around 22% – This reach in efficiency of thin-film is a major breakthrough & as good as some of the best silicon wafer solar cells.
Thin-film solar panels are quite flexible & have various applications such as on Vehicle Surfaces in VIPV concept (Vehicle Integrated PhotoVoltaics).
According to CleanTechnica, thin-film solar has one significant disadvantage, it is less efficient at converting sunlight into electricity than silicon wafers. 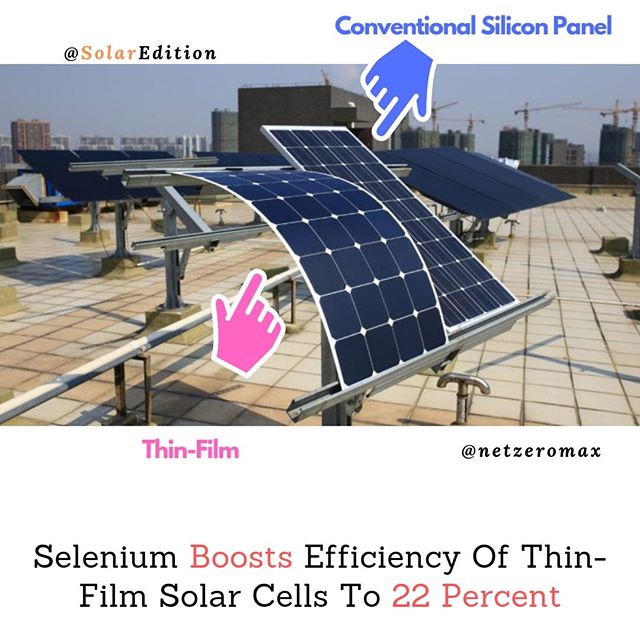 The question the scientists couldn’t answer was why adding selenium to the mix made the thin film cells more efficient. Their experiments revealed that selenium overcomes the effects of atomic-scale defects in the cadmium telluride crystals. Electrons generated when sunlight hits the selenium-treated solar panel are less likely to be trapped and lost in the defects often located at the boundaries between crystal grains as they are grown, increasing the amount of power extracted from each solar cell in the process.
–***–
Source:http://ow.ly/bzJH50upLCA
Photo:http://ow.ly/sg8050upLCB
———

It’s just a matter of when that a $20bn Long-distance power cables taking Solar Electricity in Darwin, Australia to consumers in Singapore and Indonesia !!! This will “stretch” the technology for transmission technology, but is […]

Spain’s Council of Ministers approved a royal decree regulating electricity self-consumption from the administrative, technical and economic point of view. Collective self-consumption has been enabled, which can benefit neighborhood communities and industrial estates. According to […]