The UK has dropped from seventh to eighth in the Renewable Energy Country Attractiveness index as the country’s parliament tries to figure out how it will exit the European Union (Brexit) on its currently scheduled departure date of April 12, 2019.
According to RenewableEnergyMagazine, A no-deal Brexit for the UK is still possible, meaning that it would leave the EU without any agreements about how the relationship between London and Brussels would appear in the future. As a result, investment in UK renewables has dropped by 46 percent due to the uncertainty of how Brexit may alter the cost of exported energy to the continent, as well as the price of imported renewable equipment.
Yet despite the uncertain future between the UK and the EU, solar energy is set to experience a boost in the UK, partially thanks to the political turmoil that threatens to engulf the country. No agreement means no stable EU-UK energy transfer deals, and solar energy has more chance to grow in unstable conditions than traditional energy sources.
It’s important to notice that ,since 2008, solar power has become the second most popular form of renewable energy behind wind in the UK. In 2018, it generated one-fifth of the country’s electricity during the summer months and almost 850,000 UK-based homes have been fitted with solar panels.
——————–***——————–
Source:http://tinyurl.com/y2jnajcs
Photo:www.renewableenergymagazine.com
…………………………………….
‘All rights to go to the author of the news & image as mentioned above’
——————————————- 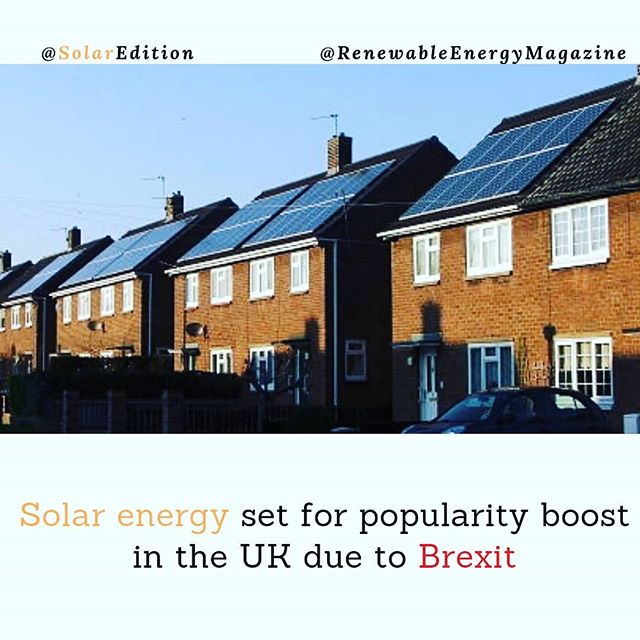 Comparison Between Cumulative Capacity of Renewables and Fossil Fuels in 2019