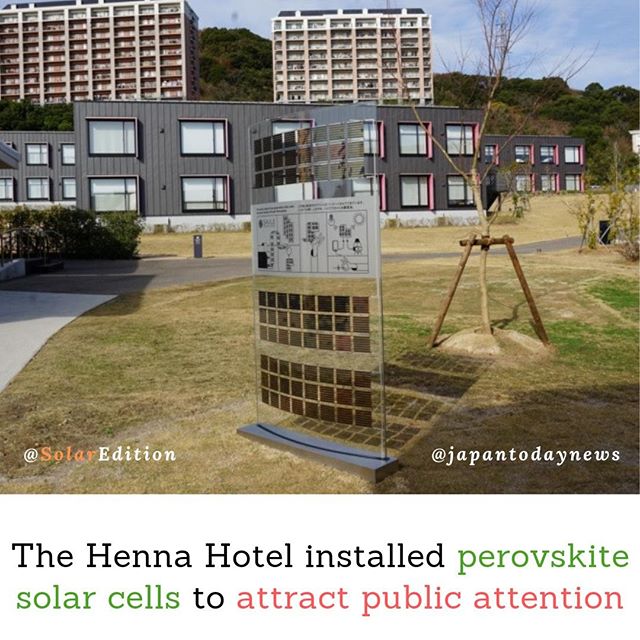 Huis Ten Bosch increased the number of beds in the Henna (Weird) Hotel Huis Ten Bosch accommodation facility and opened the south wing building in the third construction phase on Dec 21. The company is using perovskite solar cells for the building.
According to JapanToday, Huis Ten Bosch Co Ltd has installed perovskite solar cells, which are attracting attention as next-generation solar cells, at the hotel.
It employed a film-type perovskite solar cell developed by Poland-based Saule Technologies. Its transparency is higher than those of similar products developed by other companies.
Huis Ten Bosch installed 72 units of the cell by sandwiching them between walls made of transparent materials. The output is 15W, and power generated with the cells is used as a power source for illuminating a billboard of the new wing.
It installed a 250kW solar power generation (PV) system on the roof of the Henna Hotel and is selling electricity generated. The hotel is also equipped with a stand-alone system that combines a 62kW rooftop PV system and hydrogen storage and supplies all the power consumed in 12 rooms.
——————–***——————–
Source:@japantodaynews
Photo:@japantodaynews
…………………………………….
‘All rights to go to the author of the news & image as mentioned above’
——————————————-

The Finalists of Intersolar Awards 2019 were announced today …

Recently, we have published a post about Nevada that it is the fourth US state to commit to 100% clean energy after California, Hawaii, and New Mexico. Now, we should add Washington State as the […]

Solar Edition Instagram: According to solardaily news, Solar rays are a plentiful, clean source of energy that is becoming increasingly important as the world works to shift away from power sources that contribute to global […]