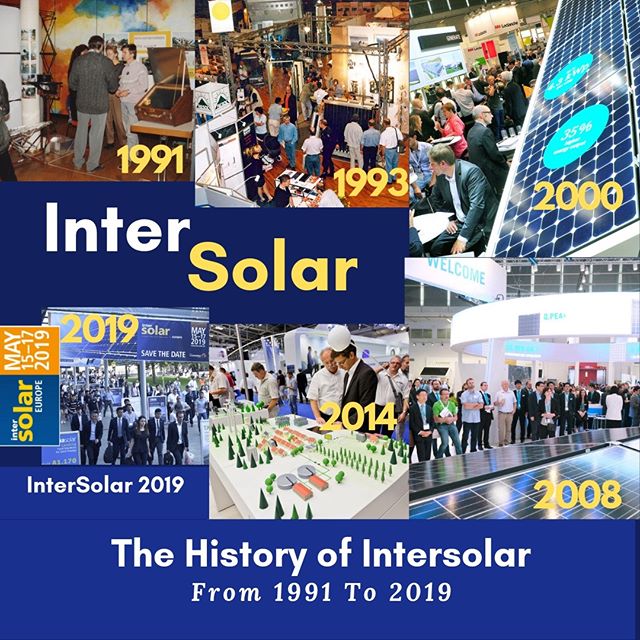 1991
It started with the one-day event Solar, organized by members of the Working Group for Environmental Technology in Pforzheim, Germany, at which five solar companies presented their products.
1993–1999: The expansion of Solar
Over the years that followed after the foundation interest in solar technology grew and thus the number of exhibitors and visitors in the following events.
2000: How Solar became Intersolar
The awareness of the solar exhibition beyond Germany’s borders had been raised and so “Solar” was renamed to “Intersolar”. 185 exhibitors and 11,505 visitors came to the first Intersolar in 2000.
2007: Intersolar moved from Freiburg to Munich
The exhibition grew significantly further and in 2007, Intersolar counted already three times more exhibitors and visitors. So again, the exhibition center was outgrown and Intersolar had to move from Freiburg to Munich.
2008–2013: The evolvement of Intersolar to the world’s leading exhibition series for the solar industry
By organizing further exhibitions on other continents, Intersolar evolved to the world’s leading exhibition series for the solar industry and its partners.
2014: The expansion of the product range to include energy storage systems
In order to further increase the share of solar power in the general energy industry in the future, Intersolar expanded its product range to the field of energy storage.
2019
Exhibitors are offering their products and services in fields of solar thermal technologies, solar power plants, grid infrastructure and solutions for integration of renewable energy. All these will have been gathering under one roof at Intersolar. ——***—–
Source:@SolarEdition
Photo:@SolarEdition & @intersolar_events
————–

Berlin to Unveil its First Integrated & Smart-City Quarter in a Size of 7.6 km2

The first smart-city quarter in Berlin unveiled. This smart city includes 90 apartments and 10 commercial units spanning an area of more than 7.6 square kilometers. The project which was completed in the spring aims […]

The majority of new renewable generation installed around the world last year is delivering power at a lower cost per MWh than new coal-fired production, according to a new report from the International Renewable Energy […]

Solar-powered moisture harvester collects and cleans water from the air

According to FAO estimates, by 2025 nearly 2 billion people may not have enough drinking water to satisfy their daily needs. One of the possible solutions to this problem is retaining water from the air. […]