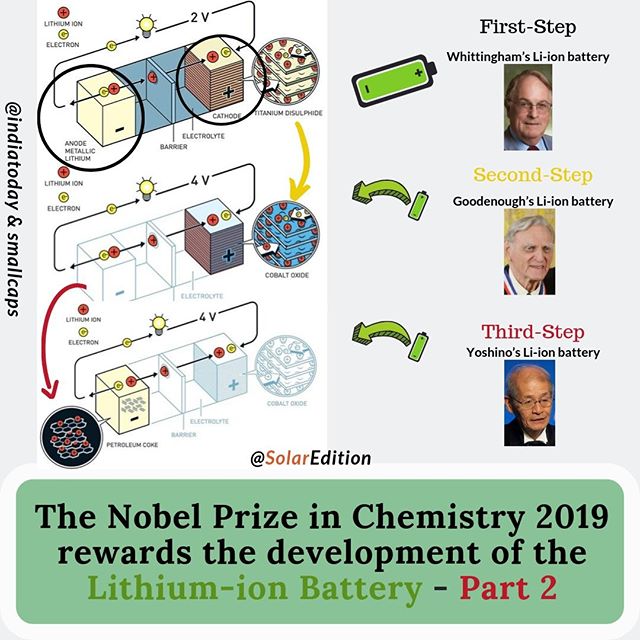 The 2019 Nobel Prize in Chemistry awarded to 3 scientists who developed lithium-ion (Li-ion) batteries. But why batteries?
Olof Ramstrom, a member of the Nobel Committee for Chemistry, said that Li-ion batteries have had a key role in the invention of the new pocket-sized cell phones, laptops, electric cars and renewable-energy devices such as solar panels that can help address the problems of climate change.
In the early 1970s, Dr.Whittingham who was investigating the use of lithium has found that lithium would make a good anode because it released electrons easily. It had another advantage, being the lightest metal. These advantages made it possible to pack a lot of lithiums into a small space compared to the older used material in the lead-acid batteries, which was dominant at the time. He also put another layered material on the other side called cathode which was titanium disulfide. The titanium had spaces that could capture the released electrons. The obstacle of Whittingham’s battery was that this combination of materials had the unfortunate potential to explode.
Around 1980 Dr. Goodenough found that Li-ion batteries had so great potential that would be substituted cobalt oxide, another layered material, with titanium disulfide. Due to it, Goodenough’s battery made almost as twice as powerful Whittingham’s battery.
Dr. Yoshino who followed the path of Goodenough switched out lithium anode by complicated carbon-based electrodes that could house lithium-ions between their layers too. This made Li-ion batteries safer because of eliminating pure lithium from the battery entirely.
—***—
Source:@Solar_Edition
Photo:@Solar_Edition
———–

This post was posted before with a mistake, therefore being reposted after the correction. Solar Edition apologies for any inconvenience we may have created. As Hurricane Dorian wreaks havoc across Florida, electrical grids across the […]

Hydrogen storage is a clean and green energy technology

In an electrolysis process, the water molecule can be split into hydrogen and oxygen by the use of electricity. This process has high energy demand. Thanks to the descending trend of the renewable energy price, […]

Solar Edition Instagram: According to PV-Tech news, A 100MWh battery energy storage system has been integrated with 400MW of wind energy, 200MW of PV and 50MW of concentrated PV (CPV) in a huge demonstration project […]